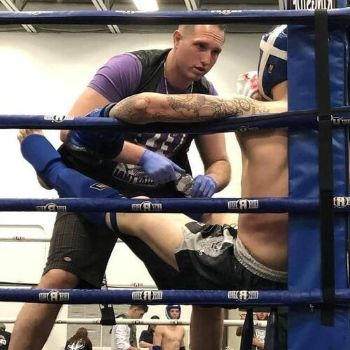 Michael rakay has been training in muay thai for over a decade. Michael was once almost 300 lbs before training in muay thai. Bored with traditional workouts michael started learning muay thai to lose weight but quickly became hooked and wanted to compete. During his fighting career michael was regularly competing for titles on some of the east coast’s biggest promotions. He was also known for having a heavy right hand which resulted in several ko’s. After injuries forced michael to retire from competition he dove head first into coaching. As a coach michael has trained students coming into the gym for their first lesson, as well as cornering experienced fighters for some of the world’s largest promotions. As a fishtown resident for over a decade, michael founded heavy hitters thai boxing to spread his passion for muay thai with the community he calls home. When not in the gym michael can usually be found walking around the neighborhood with his wife ashley, and daughter, madelyn frequenting other local businesses and restaurants.